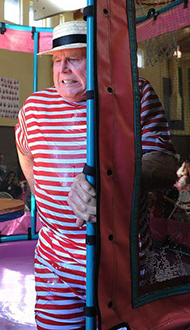 Every year, Casa Pacifica Centers for Children and Families hosts an employee appreciation event on the Camarillo campus. And this year, the centerpiece of the celebration was a dunk tank — together with the person perched above the water: Casa Pacifica CEO Steven Elson.Among those sending Elson into the water were Ventura County Assistant Sheriff Bill Ayub and Elson’s executive assistant, Cindy Dombrowski. Also trying were other employees and community donors who participated in the Giving Tuesday Challenge.

It was that challenge that gave Elson his date with the dunk tank. The Giving Tuesday campaign, which took place in November on the Tuesday after Thanksgiving, brought in more than $15,000, thanks to two teams competing to raise the most money. The teams were called “Dunk Steve” and “Save Steve.” No need to say which team won.