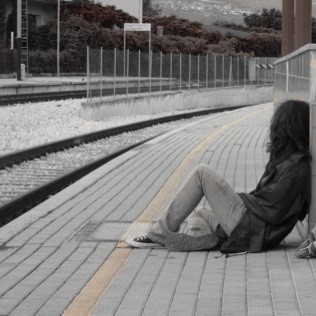 18-year old Encinitas High School student Kassidey Kanner recently started a campaign seeking the installation of suicide-prevention signs along the Leucadia rail line after a man stepped in front of a moving train in March of this year.  Thousands of people have signed her online petition urging Mayor Catherine Blakespear to invest in signs displaying a hotline number and a message offering help to anyone contemplating suicide. In the meantime, Kanner has posted temporary paper signs with the same message, similar to those found on the Golden Gate Bridge.

In this year alone, as of April 6, there have been six fatalities along the Coastal Rail Line: two in Encinitas, three in Oceanside, and one in Carlsbad. Though the NCTD does not keep statistics on which deaths are ruled suicidal and which are accidental, suicide is a leading factor in railway injuries and death.

In light of this, many railways have opted to install signs like the ones that Kanner is calling for along their tracks. The signs can be found dotting tracks for Caltrain, the commuter rail service for the San Francisco Bay area, as well as CTA tracks in Chicago and SEPTA tracks in Philadelphia.

Other rail lines have taken more drastic measures to prevent both accidental and suicidal strikes, such as lowering tracks to run below ground. Though this procedure is costly and time-consuming, statistics show that it is worth the effort, with success stories such as Solana Beach, which underwent the effort to lower tracks in 1999 and has since has had no incidents of train-related injury or death.

At Casa Pacifica, suicide prevention is one of our top priorities. If your child or teen is showing signs of suicidal thoughts and you believe he or she is in need of intensive therapeutic intervention, visit us today at Casa Pacifica Centers for Children and Families today to see how we can help: https://www.casapacifica.org.