Food, Wine, and Beer For a Cause 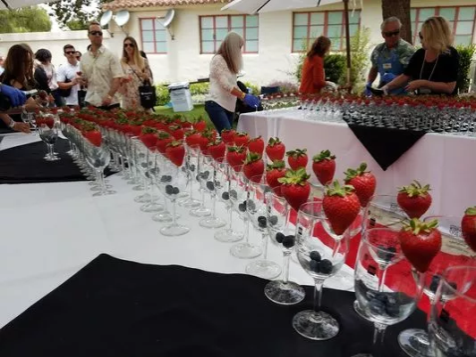 The 2017 Casa Pacifica Angels Food, Wine, and Brew Festival was a smashing success! This June, thousands of people filed into this sold-out event not only to participate in Casa Pacifica’s largest annual fundraiser, but also to explore the best in local food, wine, and beer.

The Food, Wine, and Brew Festival has been a tradition since 1994, when the first event was held in the Ventura Viewpoint Inn. In 2001, it moved to the Mandalay Beach Resort in Oxnard where it stayed until 2007 when California State University’s Channel Islands became the event’s location, where it has since stayed. As Casa Pacifica has grown and expanded, so has the Food, Wine, and Brew Festival, becoming over the last 24 years the premier food and wine event in Ventura County and being voted the “Best Charity Event” and “Best Food & Drink Festival” every year since 2012.

One of the main attractions at the Food, Wine, and Brew Festival is the Yummie Top Chef Awards, split into two categories: one for savory dishes, and one for sweet. On the savory side of things, the top prize was taken home by Chef Alex Castillo of Twenty88 Gourmet Fusion, who impressed judges and attendees alike with his “Cuban Skewer.” Second and third place went to Chef Ernest Romero of J Wolf Catering & BBQ and Chef/Owner Sandra Cordero of Gasolina, respectively, with Chef Romero showcasing a “Pork Belly Bahn Mi,” and Chef Cordero her “Sandia y Tomate Gazpacho.”

Read more about the Casa Pacifica Food, Wine, and Brew Fest at:

At Casa Pacifica, we rely on fundraisers like these and the generous donations and volunteer work from the wonderful community of Camarillo for help reaching as many hurting children as possible. Explore how Casa Pacifica Centers for Children and Families provides Camarillo’s most vulnerable with help and hope at: https://www.casapacifica.org/.