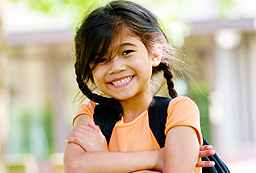 Holly and her sisters were homeless before they found refuge at Casa Pacifica. They lived in a car with their single mother who had financial trouble. Holly’s grandparents helped out the young family by moving them into their home, but Holly’s troubles weren’t over. Unfortunately, the family had an extensive history of sexual abuse. As the baby of the family at six years old, Holly was the easiest target for the abuse. She and her siblings also witnessed domestic violence in their grandparents’ home.

When Holly arrived at Casa Pacifica, she experienced culture shock and had difficulty adapting to the strict structure of McDonald’s Cottage. It was hard for her to control her emotions and she would become physically and verbally aggressive. She had trouble establishing and maintaining relationships, and when interacting with peers and staff she had difficulties respecting others’ “bubble space.” She was sometimes physically intrusive or clingy, and was unaware of what constituted appropriate touch. She experienced intense sadness, was often tearful. Since her former living situation did not regularly provide her food, Holly was worried about meals and often hoarded snacks.

Holly’s treatment team consisted of her cottage staff, clinician, behavior specialists, and others. They decided to focus her target goals on learning appropriate boundaries with adults and promoting school and her education. To help her with her adult and peer interactions, Holly was placed in Casa Pacifica’s Parent-Child Interaction Therapy (PCIT). Within a neutral setting of playtime, Holly interacted with her cottage staff while they received coaching from a clinician through an earpiece to manage and improve Holly’s behavior. Holly learned quickly and before long her cottage staff noticed changes not only through observation, but also when Holly used language in her daily conversations. With the help of her clinician and cottage staff, Holly also learned how to distinguish between appropriate and inappropriate touches from adults and peers. She eventually was able to recognize and communicate her feelings. This was apparent when she was able to advocate for herself by voicing her discomfort with potential foster parents. The foster home proved to be an unsafe environment, which would not have been discovered without Holly’s new skills to understand and communicate her feelings regarding appropriate touch.

When Holly came to Casa Pacifica she could only identify 8 out of 72 “sight words.” Since she never really had a home school, Holly was enrolled in a local kindergarten class near Casa Pacifica. She enjoyed going to school and every day her cottage staff would work diligently with her on homework. Through constant persistence and support, Holly was able to sound out words and was beginning to read. By the time she left Casa Pacifica, Holly had made up much of the lost ground of her early education. Holly was placed in an appropriate foster home after about nine months of living at Casa Pacifica.

From her social worker’s last report, Holly, now seven years old, is successfully living in the foster home and is going through the process of adoption. During her stay in Casa Pacifica’s shelter, Holly was supported by her cottage staff, her clinician, behavioral specialists, the health clinic, the Multi-Sensory De-escalation Room, Parent-Child Interaction Therapy, recreational therapy, the Pre-K Cottage, and Archie, which illustrates the wide range of services and tools that Casa Pacifica weaves together as a safety net to care for these vulnerable children.

We wish Holly and her new family much happiness, love, and joy!

Note: Holly’s name and photo have been changed to protect their privacy.